Comments from a young reader 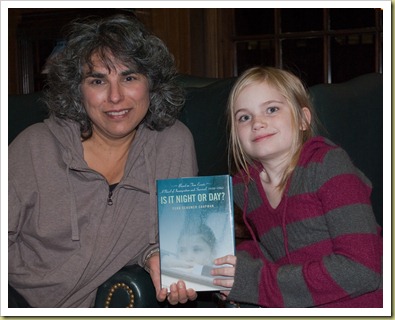 EJ’s Thoughts (age 11): Is It Night or Day?, yes this is the title of one of the best books I have ever read. Basically, Edith, a Jewish German must move away from her home in Germany. She moves from her family to live in Chicago because of World War II. She has to learn English and try to fit in with Americans.

If someone asked me who my favorite character was I would have to say… Dorothy. I know she does seem to be mean, but she gets better. A character that I don’t like very much would have to be Julius. He changed and kind-of made me mad.

I guess one of the parts I don’t like is the ship, it’s not that fascinating. I think it was a little slow at that part, but I got through it. My favorite scene was when Dorothy was trying to show Edith her presents and the fight they had.

One of the reasons I got into this book was because it was about German Jews, and it took place during the time of World War II. I am fascinated with those two things: Germany, and World War II. Plus, the story takes place in Illinois part of the time.

I would recommend this book to all ages, especially to those people like me who like history because this book shows what it was like for people like Edith back then. Oh, and the by the way, almost all of this book is true.